Click here for more information about other SD competitions and the Energy Endeavour Foundation, stewarding body of Solar Decathlon Europe
final results of the sde19 competition
The Competition of the ten resource-responsible prototyped homes was closed on 28 July with the Final Awards Ceremony

final results of the sde19 competition

In mid-June, more than 400 students from 27 universities representing 8 countries of 3 continents arrived to Szentendre with the aim of assembling, with their own hands, the prototyped homes of the future after nearly two years of planning and thoughtful preparation. Altogether 10 Teams qualified to participate at the Solar Decathlon Europe 2019 international university competition in innovative homebuilding. The prototypes and the Teams’ performance were evaluated by international juries in seven contests, and through measurements by monitoring tools in three ones. Based on the overall scores, the first prize was awarded to Habiter2030 Team from France, the second prize to MOR Team TU Delft from the Netherlands, and the third prize to Over4 Team from Romania.

The main aim of Solar Decathlon initiative is to foster cooperation of university researchers and developers with industrial partners and sponsors, building on creativity and innovative abilities of young people. Similarly, it fosters the design of such innovative and energy efficient houses that are showcase homes powered by renewable energy demonstrating sustainability and conscientious use of resources. The SDE19 competition, like the Solar Decathlons so far, consisted of 10 separate contests in which projects were evaluated and measured in terms of resource management, cost efficiency and attractiveness, just mention a few.

According to the main topic of the competition hosted by ÉMI Non-profit Llc., Decathletes had to focus on retrofitting existing building stocks. The prototypes resulting from their work responded to mass challenges of our times such as rehabilitation of abandoned offices by function extension, and improving liveability of terraced houses, concrete blocks of flats and Hungarian cube houses. Students presented how they imagined the future of architecture and dwelling by prototypes that had been open for visits inside-out.

The construction of the prototypes was supported by more than 100 trucks and vans, which carried materials from the respective countries. In the SDE19 Solar Village Algerian, Belgian, Dutch, Hungarian, French, Romanian, Spanish and Thai architectural heritage was taken to the next level by the Decathletes’ innovative thinking and ideas aiming for sustainability.
Following a tense construction period, which often brought extreme conditions for the Decathletes, the Solar Decathlon Europe 2019 exhibition area opened its doors on 13 July. The competing Teams waited excitedly for the visitors and the professional jury to present their innovative projects.

podium winners of the overall decathlon

The competition ended on 28 July with the final awards ceremony after having presented innovative and resource-responsible buildings. Based on the overall score, including all points given by the professional jurors to each Team, the final rankings saw – in close competition – Habiter2030 Team from France at first place, MOR Team TU Delft on second and Team Over4 from Romania at third place.

During the SDE19 Final Awards Ceremony, the Public Choice Award was given to the KMUTT Team from Thailand for implementing ‘Resilient Nest’ project while the Tungsram Smart House Special Award went to Team Ghent University from Belgium for ‘The Mobble’ project.
The SOMEshine Team, formed by a consortium of universities of Pécs, Miskolc in Hungary and Blida in Algeria, was given both the ÉVOSZ Special Award (ÉVOSZ stands for National Association of Construction Companies in Hungary) and the Community Award. The Speed Peer Review Special Award was earnt by the koeb Team representing the Budapest University of Technology and Economics. According to the decision SDE19 Organisers, MOR Team TU Delft receives a Special Trophy for Most Podium Awards.

In previous editions of Solar Decathlon Europe competitions, the disassembly of the prototypes began immediately after the final awards ceremony took place, and was carried out within a few days. The organisers of SDE19, however, decided to break this tradition in order to host an event, which includes an extended exhibition following the 2-week long public competition phase: until 29 September, all 10 energy-efficient prototypes can be discovered. Some of them can be visited even in 2020 as showcase houses of the future National Smart Home Park to be opened in Szentendre next year.
The detailed results of the SDE19 competition can be found here.

visiting period
The two-week competition (13 to 28 July) is followed by a two-month extended exhibition that closes on 29 September.
more 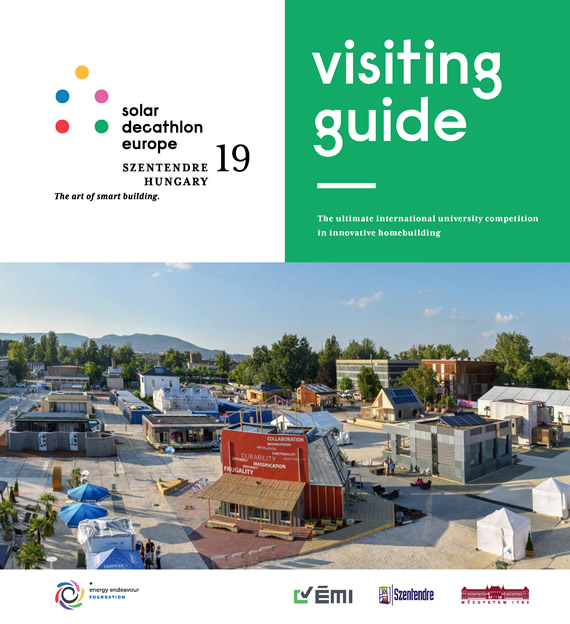 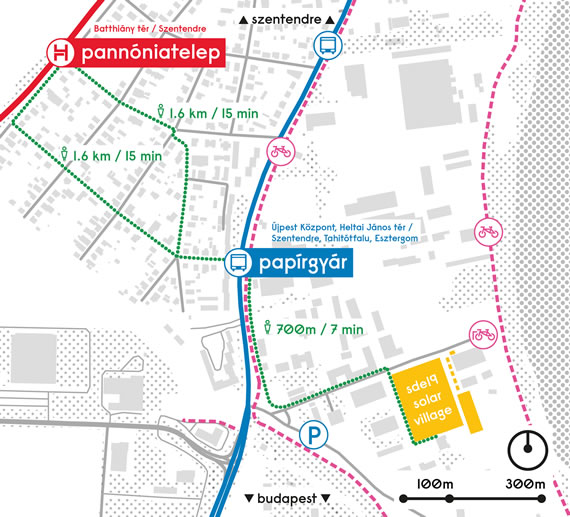 venue and transportation
Visit us in a resource responsible manner.
more